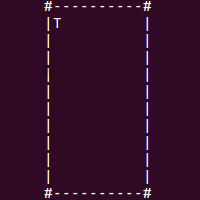 For now we can't do much with C language. In this tutorial we'll learn how to store data during work of the program. For that we need to understand what is variable.

We already know what is string literal - that's just the string of text that appeared in some program. The same way works number literals:

C needs to differ different type of numbers as float numbers and integer numbers are represented differently in memory. Let's look what data types we can use in C programming language:

Each data type in C language occupies specific memory capacity. Internally all data types are just a numbers (even text). So each data type has it's range.

There is a special 'data type' void - it tells that there is no data type. It may sound strange but void is used a lot.

We saw usage of data types in C language already. Let's look at the head of main again:

Now we know what is int and void. Though the real meaning of all this string we'll understand several tutorials later.

Let's imagine the game situation. Player is the commander of the tank. He can move around the field. When tank moves, it consumes fuel. So we can say that fuel value is changed as time is going. In C language we can model this situation with variable:

On the first string we declared and initialized the variable fuel. Then in the commented code we moved the tank (there is no actual movement, just a comment for now), then we changed fuel value. And then we printed the value of fuel.

Variable is some thing that can change the value. All variables must have an identifier - name by which we can address the variable in our program. Also all variables in C language must have data type. In the code above our variable fuel has float data type, so it can represent not only integer values.

Identifier is a name of a variable. Identifiers needed not only for variables but for functions too. So printf and main are identifiers. C language has rules for identifiers. They can contain letters, digits and underscore character _. Identifiers can't start from digit. Also you can't use C language keywords (like int, float, if, while...) for identifiers. And of course there can't be same identifiers in one program (more precisely - in scope, but we don't know what it is yet).

There are different ways to introduce variable into our program. First is variable declaration:

During variable declaration processor will reserve needed amount of memory for it. For int variable it will reserve 4 bytes, for char - 1 byte...

We can declare variable and put a value in it at the same time. That's called initialization:

In last string only f variable is initialized with value, d and e are just declared. You should not use declared variables, so it's good to initialize variables with some starting value. For numbers it's usually zero. But that's not always possible, so sometimes you'll just declare variable and then in another part of a program you'll put a value in it.

After variable declaration you can change the value of variable. You can do this with the assignment operator =:

In the beginning we'll have 4 variables to simulate our tank: x, y - coordinates, fuel and letter - the character that will represent our tank on the field. Coordinates will be of integer type, fuel - float and the tank representation - char:

In this tutorial we learnt about data types and variables in C language.