In this tutorial we will learn how to work with Python interactive shell in Windows and Linux and how to run files with Python source code.

Interactive shell allows to run Python code in dialogue mode, i.e. you input the command and immediately see the result.

Interactive mode is started by python.exe file in Windows or by python (python3) command in Linux. It will start interpreter from Python directory. You need just input python in command line.

My path to the interpreter - C:\python34\python.exe, you will have another. At the start of the interactive shell, you can see the Python version installed on your computer. On the screenshot you can see v3.4.2, I'm currently using v3.5.2 and the latest Python release - 5.6.0 (January 2017).

IDLE is very simple IDE for Python. On one hand in the IDLE word, there are three letters coincide with IDE, on the other hand, IDLE is named after Eric Idle - the member of Monty Python (it's for them Python is named).

On Linux you'll need to install IDLE manually - it's not the part of standard package. For Windows users: you can run IDLE differently

IDLE has py or pyw extensions. These are standard extensions (pyw - for windows, but you can use py on windows too). You can open idle.py or idle.pyw in any text editor - there you will see the python source code.

On the next screenshot there is running Python interpreter in Idle: 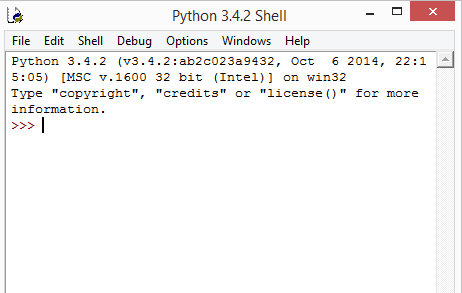 There are much more powerful IDE's for Python. As for me, I'm using Sublime text editor most of the time.

Let's try to write something in Python. Start an interactive shell and input next commands:

When you input command and press Enter, the interactive shell executes the command and outputs the result.

To exit from interpreter you can input quit() or Ctrl+Z:

As I mentioned earlier, files with Python source code usually have .py extension. You can run them with the command python (or python.exe) with the argument - the name of the file, which you want to run.

Let's create file hello.py in any directory. Open it in a text editor and paste next string:

Now in the command line you need to go to the directory where you've created hello.py file. And here you need to input:

Your code will be executed and in the console, you will see greetings. 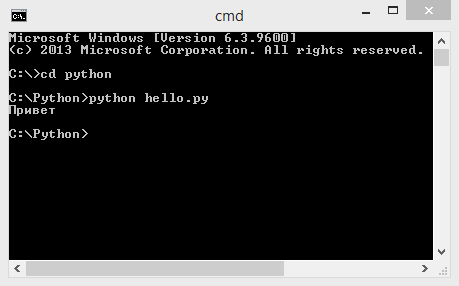 On this screenshot you see the word "Привет" (privet), it's "hello" in Russian.