Vector is an object that has direction and length (magnitude). We can represent points in space as vectors and additionally we can use vectors to represent physics forces.

Also in this tutorial we'll discuss the implementation of vector class in Python.

In printed text for vectors we use Latin letters in bold: a, b, v... In handwriting vectors are represented as: a or a. 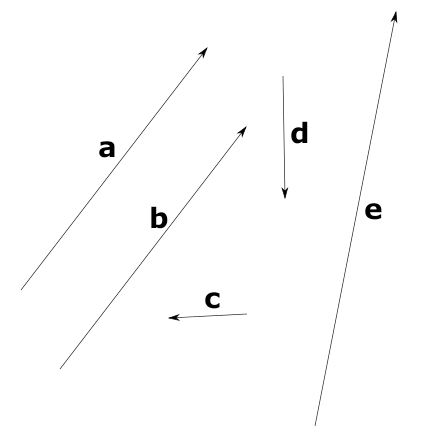 As you can see there is no coordinate system as vectors represent direction and magnitude and not position. Though we can represent vectors in space. Vectors have components that can be interpreted as coordinates. Here is example of 2-dimensional (on plane) vector: a = (1, 1), and here - 3-dimensional (in 3d space) vector: b = (3, 2, 1). These numbers are correspond to coordinates of the point that is located at the end tip of vector if we put beginning of the vector in the origin of coordinate space. Let's see examples: 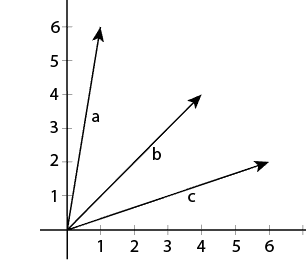 Such vectors are called radius vectors and they are bridge between just magnitude/direction to points. With radius vectors we gain access to very powerful tools in 2d/3d graphics.

We can do many things with vectors: find it's length (magnitude), sum (to find new position on plane or in space), multiply. Though the applications for these operations we'll find in next tutorials, after we'll discuss matrices and we'll be able to transform (change position, rotate) vectors.

Magnitude of the vector

Magnitude (length of vector) is denoted as ||v||. We can calulate it by using Pythagoras' theorem:

We can sum vectors. The result is the new vector which components are the sum of appropriate components of initial vectors. 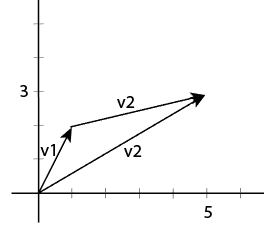 Vector subtraction is just a case of the sum:

Vectors have two multiplication operations. The result of one is scalar (simple number) - it's called dot product. Another one is cross product - the result of it is anothe vector. Let's start with dot product. We can calculate dot product in two ways:

The result of cross product is anothe vector that's perpendicular to both initial:

Also we can calculate cross product this way:

The order in which we make cross product matters. If we swap vectors, the result vector will have opposite direction

Normalized vector - is the vector that points to the same difection but has unit length. To find normalized vector we need to divide each component of vector by vector's magnitude.

We'll use vectors a lot in following tutorials. They are essential part in graphics programming.